Have A Merry Jerry Birthday

August 1 marks what would have been Jerry Garcia‘s 75th birthday. And not surprisingly there are a number of events happening today, and this month, that salute him.

Tonight, Fathom Films presents the 7th annual Grateful Dead Meet-Up at the Movies, which will be screening the Grateful Dead‘s July 12, 1989 concert at Washington D.C.’s RFK Stadium. This compete, never-before-seen performance features a rare first set where each of the band’s four lead vocalists sing at least one song. The second set finds Bruce Hornsby sitting in (“Sugaree,” and “Man Smart [Woman Smarter]”) as well as one of the only video recorded versions of “Black Muddy River.” Get more details at https://www.fathomevents.com/events/grateful-dead-meet-up-2017?utm_source=fathom&utm_medium=press+releases&utm_campaign=grateful+dead+meet-up+at+the+movies+2017https://www.fathomevents.com/events/grateful-dead-meet-up-2017?utm_source=fathom&utm_medium=press+releases&utm_campaign=grateful+dead+meet-up+at+the+movies+2017 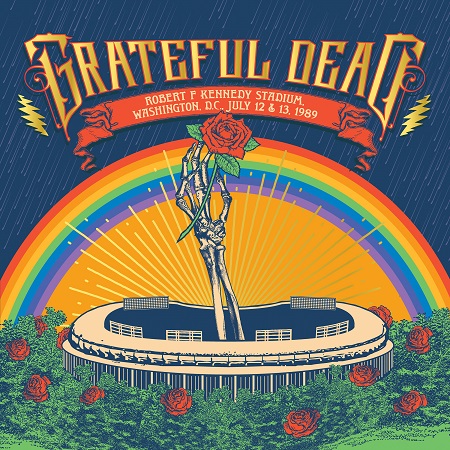 Rhino announced today that, in November, a six-disc box-set of the Dead’s July 12-13 RFK shows will be coming out (pre-orders are available now on dead.net). Hornsby also stuck around for the second night and joined the Dead for “Tennessee Jed” and “Stuck Inside of Mobile With The Memphis Blues Again.” July 13’s concert also offers an early performance of Brent Mydland‘s “I Will Take You Home,” which later appeared on Built To Last. The two previously unreleased shows come from the band’s master 24-track analog recordings that have been mixed and mastered. The July 13 concert features the group doing

Special concerts will have happening across the country throughout the week, with the 15th Annual Jerry Day occurring Aug. 6 at the Jerry Garcia Amphitheatre in San Francisco’s McLaren Park; the show’s bill includes Melvin Seals and the JGB, Stu Allen & Mars Hotel and Midnight North.

From Aug. 1-9 it will be Jerry Week on SiriusXM’s The Grateful Dead Channel, featuring archival interviews, rare concerts and other special goodies like a re-airing of the 2017 Red Rocks 75th Birthday Concert and the 2016 Jerry Garcia Symphonic Celebration. If you have AXS TV, you can view the latter concert on Aug. 5 at 9pm EST. Pandora, meanwhile, has created its own Jerry Garcia channel, showcasing music from throughout his career. You can access the channel at http://pdora.co/jerry75/.

And you can also chill out at home and enjoy some Cherry Garcia while listening to Round Records/ATO Records’ recently released GarciaLive Volume Nine: August 11, 1974 – Jerry Garcia & Merl Saunders 2-CD set.

I am a longtime writer, and lover, of music and pop culture. I have written for Entertainment Weekly, the Los Angeles Times, the LA Weekly, the San Francisco Chronicle, Cleveland Scene and more places (that I wouldn't take up more of your time mentioning now).
View all posts by Michael Berick →
This entry was posted in Music, Uncategorized and tagged Brent Mydland, Brett Myland, Bruce Hornsby, Grateful Dead, Jerry Garcia, Mars Hotel, Melvin Seals, Merl Saunders, Midnight North, Stu Allen. Bookmark the permalink.