I wanted to catch up on some recent and somewhat recent news.

It seems like it is a particular popular time for covers albums. You have probably have heard that Bob Dylan is following up last year’s Shadows of the Night with Fallen Angels, which includes his versions of classic American songs like “That Old Black Magic,” “It Had To Be You” and “Come Rain Or Come Shine.”

Richard Barone, from one of my favorite ‘80s bands The Bongos, is working on a project entitled Sorrows & Promises: Greenwich Village in the 1960s, which salutes the downtown NYC singer-songwriter scene of the Sixties. Among the proposed tracks are tunes from Mr. Dylan, Phil Ochs, Dion, Paul Simon, Lou Reed and James Taylor. You can visit http://pledgemusic.com/richardbarone to find out more details.

Bill Lloyd, the Lloyd in the country duo Foster & Lloyd, shows his love for some of his musical idols on Lloyd-ering, which includes his renditions the Byrds’ “The World Turns Around Her,” the dB’s “Neverland,” Wreckless Eric’s “Whole Wide World,” Bobby Fuller’s “Let Her Dance” the Hollies’ “Step Inside.” Except for a until-now-unavailable take on the Lovin’ Spoonful‘s “Coconut Grove,” the songs are drawn from his contributions from various tribute albums over the years. Since I have been listening to the Raspberries this week, here is Lloyd’s version of “Goin’ Nowhere Tonight.”

John Prine’s trusty guitarist Jason Wilber has gathered a very fine, acoustic album of eclectic covers. The tracks on Echoes range from songs by Prine, Leon Russell and Joni Mitchell to ones by Pink Floyd, Rolling Stones and Echo & the Bunnymen.

Continuing in the covers theme – I See Hawks In L.A. frontman Robert Rex Waller Jr. takes on tunes from Daniel Johnston, Neil Young, Nina Simone, Mike Stinson, Oak Ridge Boys, the Hollies and the Doors on his Fancy Free. You can learn more about this CD at https://www.kickstarter.com/projects/1218631528/robert-rex-waller-jr-fancy-free-solo-covers-lp-pre

And the most conceptual covers album of recent memory is Petra Haden Sings: The Who Sell Out and this 2005 CD has been reissued on Bar/None along with her 1996 solo effort Imaginaryland. 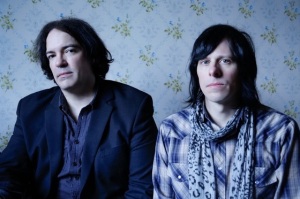 Ken & Jon of the Posies

Ken Stringfellow and Jon Auer are back together as the Posies. They have a new album Solid States, which is their first one of new material since 2010’s Blood/Candy. These longtime power pop mainstays call this new CD their “most adventurous to date” so expect some unexpected sonic explorations on Solid States.

Don’t You Wish That We Were Dead is a documentary on the punk pioneers The Damned that MVD Entertainment Group will put out on DVD May 20. Besides the Damned bandmates (Captain Sensible, Dave Vanian, Rat Scabies and Brian James), the film also features Chrissie Hynde, Dave Gahan, Lemmy, Mick Jones, Billy Idol and Nick Mason (yes, from Pink Floyd).

Speaking of films, Sing Street is a delightful movie that is out now from John Carney (the filmmaker behind Once). I describe this movie, which is set in 1985 Dublin, as something John Hughes might have done if he grew up in working class Ireland and not suburban Illinois. The soundtrack, on Republic Records, includes songs from the Jam, Hall & Oates, Duran Duran and the Cure along with some really great original tunes.

79-year-old cult titan Andre “Mr. Rhythm” Williams will put out his new album I Wanna Go Back To Detroit City, a salute to his adopted hometown, on Bloodshot on June 3.  The King of Swamp Rock Tony Joe White will be releasing his 19th studio album on May 27. Rain Crow (Yep Roc) even includes a writing collaboration with Billy Bob Thornton. Yep Roc is also behind the new work by the Felice Brothers; Life In The Dark has a June 24 due date. I loved a live set of theirs I saw a few years back so I’m curious to hear this disc.

Omnivore Recordings has fashioned an Allen Ginsberg box set The Last Word On First Blues, which contains the original double LP (released in 1983) along with 11 previously unissued songs from the 1971 and 1981 sessions and demos and live recordings featuring Bob Dylan and Arthur Russell. The box set (due May 20) also includes writings and drawings from Ginsberg’s archives, a 28-page booklet of photos and an essay from set producer Pat Thomas featuring interviews with original participants.

A “red wine” vinyl version of the 1980 Takoma release Charles Bukowski Reads His Poetry is among the interesting June offerings from Real Gone Music. The archive-loving label will also be putting out a previously unreleased Live In Finland 1971 by Fairport Convention and Got A Mind To Give Up Living: Live 1966 by the Paul Butterfield Blues Band as well as a re-packaging of Loudon Wainwright‘s first two albums (his self-titled debut and Album II), the 2-CD Edgar Winter: The Definitive Collection (which includes his Epic hits “Free Ride,” “Rock & Roll Hoochie Koo” and “Frankenstein), and Sam, Hard and Heavy, the star-studded 1971 solo effort by Sam Samudio (aka Sam the Sham).

Meanwhile, Bear Family Records have released Jerry Lee Lewis At Sun Records: The Collected Works, a mammoth box set packed with 18 CDs, plus 2 300-page books. On June 4, Pete, a 1996 album Pete Seeger did with Paul Winter will be reissued as a CD/DVD package that includes some little seen latter day Seeger concert footage. 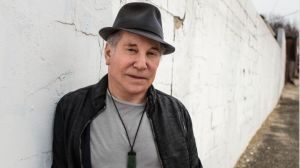 In more music legends news, Paul Simon is readying solo album 13 for a June 3 on Concord Records. Stranger To Stranger reunites him with producer Roy Halee, who has helmed several Simon & Garfunkel albums as well as some of their separate solo records. He also appears in the S&G “A Simple Desultory Philippic” song lyric “been Roy Haleed and Art Garfunkeled.”

The Rolling Stones are said to be putting out a new album that will be accenting the blues sometime this year.

Speaking of the blues, Forty Below Records will be putting out John Mayall’s Bluesbreakers– Live in 1967- Volume Two on May 6. The recording come from the Spring of 1967 and John Mayall’s band was comprised of Peter Green (lead guitar), John McVie (bass) and Mick Fleetwood (drums) before they started Fleetwood Mac. Jeff Beck, another British guitar hero from that era, has a new album and a book lined up for July.

Esme Patterson, who caught my attention with her last album Woman To Woman and her stint with Shakey Graves, has her new album We Were Wild set for a June 10 release.  June 24 is the day for the Avett Brothers’ True Sadness, (American/Republic Records), which has been described as a personal album looking back at the time together.

Sara Watkins’ new album Young In All The Wrong Ways will come out on New West on July 1. She describes it as a “breakup album with myself.” Produced Gabe Witcher, the CD has contributions from Chris Eldridge, Jon Brion, Jay Bellerose, Sarah Jarosz, Aoife O’Donovan and Jim James.  James’ band My Morning Jacket will see their 2003 album It Still Moves reissued by ATO Records, beefed up with 13 previously unreleased demos and B-sides.

I have been a fan of Jack Ingram since his late ‘90s album, so it is happy news that he has a new one on the way – look for his Rounder debut Midnight Motel later this summer. More recently (like this week)

I was impressed with the video from country newcomer Luke Bell (http://www.npr.org/event/music/474807133/got-a-broken-heart-hit-the-karaoke-bar-with-luke-bells-sometimes) . There’s an endearing mischievousness to his honky tonk tune. Another new honky tonker that I am digging is Nudie, who hails from the land up north (aka Canada).

If you are looking for some laidback folk-y music, you should check out Former Belle (led by singer-songwriter and CRUISR guitarist Bruno Catrambone) and the wonderfully named Wolfie’s Just Fine, a project by musician/comedian/actor Jon Lajoie. 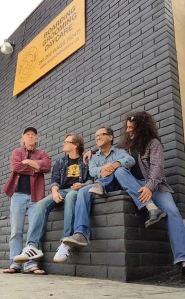 If you are looking for something with more of an edge. Divine Weeks, the underappreciated L.A. rock group of the late ‘80s/early ‘90s, has reformed for the powerful See Those Landing Lights, their first album since 1991. They will be doing a big (and free!) record release show at L.A.’s Fais Do Do on May 21.

Francophiles keep an eye out for Juniore. Fronted by brainchild of French singer/songwriter Anna Jean, the group has a cool, cinematic sound that is a little dream-like and “un peu triste.” Check out this track that is up on thefader.com http://www.thefader.com/2016/04/21/juniore-album-announcement-burger-records

Lastly, I want to note the passing of guitarist Lonnie Mack. While Prince’s death has deservedly gotten huge coverage. Mack, who was 74, ranks as one of those guys who is beloved and exulted by his peers but little known to the public. The blues-rock guitarist was a big influence on Stevie Ray Vaughan, that’s some high praise there. Here is a clip of him playing on AM Cleveland. It might not be the best Mack clip but, hey, I’m from Cleveland and it is a fun clip.