So long May, hello June. But there’s no June gloom went it comes to music-going at the start of June. It’s a special two-week edition so pay attention to the dates (and hopefully I have too).

But first, here’s what is happening the end of May. As previously reported, John Fogerty combines a birthday bash and CD release party at the El Rey on Tuesday. Undoubtedly there will be some very special guests involved. The 28th also finds Lissie bringing her haunting acoustic-based music to the Hollywood Forever’s Masonic Lodge.

Portland’s Radiation City lights up the Satellite with its delightful pop tunes on the 29th. Largo hosts a special show on Wednesday as Inara George and Van Dyke Parks collaborate on a night of Brazilian music. Thursday offers a Rolling Stones salute (and a Sweet Relief benefit) at the Fonda, with Butch Walker, Juliette Lewis and Michelle Branch numbering among the musicians and Jason Sudeikis, Will Forte and Danny Masterson scheduled to appear too. 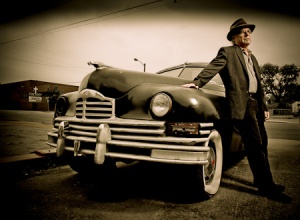 Friday hosts a pair of great shows. Master tunesmith David Olney (and his trusty accompanist Sergio Webb) shares his songs at McCabe’s with fabulous Anne McCue also on the bill. Over at the Mint, the Bluegrass Situation welcomes the lovely acoustic sounds of Joy Kills Sorrow, whose new CD, This Unknown Science may be short, but it’s definitely sweet. Trixie Whitley and Rocco Deluca perform at the Troubadour, while you can hear the local band the Blank Tapes at the Satellite.

June starts off on a busy note. The eclectic Insects vs. Robots has a show at the Venice Townhouse, while the retro cool Shannon and the Clams are at the Echo on the 1st and Santa Ana’s Observatory on the 2nd. The Mint has an early show from L.A. via N.Y.C. troubadour Jonah Smith while Billy Martin (Medeski, Martin & Wood) teams up with Wil Blades for the late show. The Wiltern will rumble with the sounds of the Black Rebel Motorcycle Club. 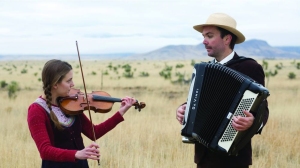 A Hawk And A Hacksaw

Jeremy Barnes and Heather Trost, better known as A Hawk and A Hacksaw, perform their cinematic Americana at the Bootleg. Their new one You Have Already Gone To The Other World is a tasty poppycosh of Eastern European sounds. Edging out as Saturday’s top show is Joe Pernice’s appearance at McCabe’s. Pernice, who was a shining light of the No Depression scene in Scud Mountain Boys, makes an all-too-rare appearance in SoCal.

Saturday also is Make Music Pasadena Day, with acts like Taken By Trees, We Are Scientists, Superhumanoids and Will Courtney performing around the city. Courtney, formerly of the Austin band Brothers and Sisters, will also play Long Beach’s Wine Bar (6/2), Echo Park’s Lot 1 Café (6/3), Pasadena City Hall (6/8) and the Cinema Bar (6/9).

Sunday, you can hightail it out to the San Manuel Amphitheater in San Bernardino where Mumford & Sons bring their Gentlemen of the Road tour (which includes Michael Kiwanuka, Eels and other acts). Closer to town, Sam Outlaw, Drive He Said (Maxim Ludwig) and Chris Shiflett & The Dead Peasants share the Grand Ole Echo bill. McCabe’s has another fine bill featuring Sara Watkins, Tom Brosseau and Z Berg. The Ohms (Pete Yorn’s project with JD King) will be at the Troubadour Sunday night while Bjork will give her disc Biophilia an intimate yet multi-media production at the Palladium the 2nd and the 5th.

Mondays in June will be Summer Twins nights at the Bootleg. June 3rd also begins Tom Petty & the Heartbreakers’ residency at the Fonda (they also play there on the 4th, 6th, 8th, 9th and 11th, but good luck getting tickets). 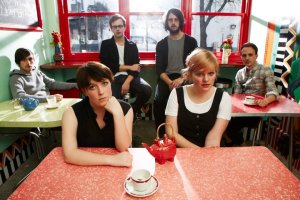 It’s International Night at the El Rey on the 4th as young Australian band Alpine serve up some summer-y sounds (check out their delightful debut A Is For Alpine) with Spanish rockers Crystal Fighters also playing. Another Australian artist, Lenka, performs at the Hotel Café on Tuesday as she showcases songs from her upcoming Shadows album. Power Pop fans will be salivating over the chance to view the new Big Star documentary, Nothing Can Hurt Me at the Grammy Museum. Following the screening, there will be a Q&A and Big Star’s Jody Stephens will play a few tunes with Luther Russell and Jason Hiller.

The Parquet Courts take over the Echo on the 5th. Their scruffy rock ‘n’ roll has been getting a lot of attention. Total Control (yet another Australian band – is there discount airfare from Sydney now?) will rule Anaheim’s Chain Reaction on Wednesday and the Echoplex on Thursday. Gold Fields and Capital Cities also do the Anaheim/L.A. shuffle, playing Anaheim’s HoB on the 5th and the El Rey on the 6th.  Largo welcomes Ron Sexsmith on Wednesday. He has brought a band along to showcase his latest, Forever Endeavor. Jewel will spend the night in Beverly Hills as she has a show at the Saban Theater. But if you are looking for something good and cheap on the 5th, then head to Origami Vinyl where Debbie Neigher and Doe Eye share an in-store appearance. Both ladies create beautifully intriguing music.

On Thursday, Paul Adelstein brings his current project, Doris, to the Witzend, while Friday offers Sam Amidon at the Bootleg (his debut Bright Sunny South is out on Nonesuch) and the impressive Minnesota rock band War Poets visit the Whiskey. UK rockers The Boxer Rebellion has a new album Promises and a show at the Avalon on Friday night. Also on Friday,

Grace Potter and the Nocturnals have a show at Pomona’s Fox Theater. Friday’s top show is at McCabe’s where the Living Sisters deliver their wonderful harmonies and special musical vision along with Carly Ritter (she’s Tex’s granddaughter) also on the bill.

The Jubilee Music & Arts Festival takes place on Friday and Saturday night. Free Energy, Black Lips, Cayucas, The Drums and Fool’s Gold are a few of the festival’s acts. 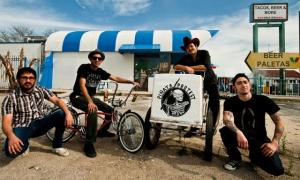 You can spend Saturday night with Rufus Wainwright at the Valley Performing Arts Center. Another artful show takes place at the Culver City’s Taylor De Cordoba, where Little Wings (aka Kyle Fields) performs at an opening of his art show there. Blame Sally wings down from the Bay Area for a McCabe’s appearance on the 8th and Patty Larkin sings there on Sunday.  Bob Malone has a Saturday night set at the Mint and Naama Kates will sit down at Molly Malone’s piano to performs her emotion-filled songs. The accordion-powered Pinata Protest (an intriguing Lone Star band that fuses punk rock and Tex-Mex music) plays with Girl In A Coma at the Satellite on the 8th and Riverside’s Pixels on the 9th.

The summer “remember your youth” amphitheater season starts this weekend with the Greek Theater welcoming Cheap Trick & Pat Benatar. Go early, however, to catch the opener Brynn Marie, a young singer with impressive vocals. Topping the weekend’s fare is the annual Iron ‘n’ Ink Ball. You don’t have to be tattooed, or get tattooed, to enjoy this festival’s lineup. On the roots side, there’s a terrific lineup including JC Brooks and the Uptown Sound, Wanda Jackson, Black Joe Lewis and the Honeybears, Rev. Peyton’s Big Damn Band, Sharon Jones and the Dap Kings, the Growlers and, quite naturally at a Tattoo Festival, the Fleshtones. Punk rock fans will rejoice with the chance to see such classic bands as The Stranglers, Sublime with Rome, The Offspring, Bad Brains, NOFX, Rocket from the Crypt, Dead Kennedys and the great Iggy and the Stooges.