Monday night features a duel between two residencies. Harper Simon concludes his stay at the Satellite with what he terms an “extravaganza” that is supposed to feature 60 performances. Come and find out find your for yourself. Or, you can pop by the Echo for Harriet, which is Alex Casnoff (ex-Dawes) current project, and Jenny O.

For the second week in a row, Tuesday is a major music night. The Mavericks, whose reunion CD In Time is a fun and gorgeous disc, headlines the El Rey. Arrive early to see opener Seth Walker, a talented rootsy, bluesy rocker. I really dug his Leap of Faith a few years back and his last album Time Can Change is a fine one too. The Troubadour offers a tempting bill of the Heartless Bastards and Jonny Fritz. If Fritz’s name doesn’t ring a bell, he used to be Jonny Corndawg. His first Fritz disc, Dad Country, comes out next month on ATO. The Rebirth Brass Band brings a little bit of Louisiana to Pico as they have two shows at the Mint on the 26th. 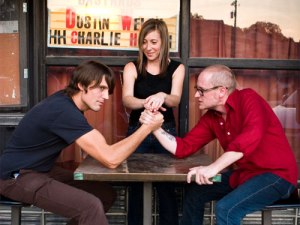 Heartless Bastards headline the Troubadour on the 26th.

The Milk Carton Kids (Joey Ryan and Kenneth Pattengale) share their lovely harmonies and compelling tunes to Amoeba for a free in-store and then have their big CD release celebration at Largo on Wednesday, with special guests rumored to include Joe Henry, Over The Rhine, Ed Helms and Jill Sobule. JAN, which is a fun but rocking project from Kim Talon (formerly of Eagle and Talon) appears at Harvard & Stone on the 27th. Also on Wednesday, Richard Hell will do a book reading/signing at Skylight Books for his autobiography, I Dreamed I Was A Very Clean Tramp. I haven’t read the book; I’m waiting for Blank Generation: The Book, which would just have blank pages.

Ladies and Gentlemen, please welcome back Billy Bragg, whose has his first new release (Tooth & Nail – a strong outing particularly if you aren’t wishing for him just to repeat another Workers’ Playtime) out after too many years. He’ll be at the El Rey on the 28th, with Kim Churchill opening. That night too, your memories of Mac (that is Fleetwood Mac) can be rekindled at the Roxy, where the tribute band Rumours (featuring Rooney‘s Taylor Locke, producer Nic Johns, among others) has a gig.

The Dustbowl Revival rolls into the Echo Thursday night on a bill that also includes the Paul Chesne Band. You can discover Caveman (it’s an indie rock band from Brooklyn on Fat Possum) at the Troubadour on Thursday or enjoy some classic reggae from Toots and the Maytals at the House of Blues. John C. Reilly and his musical pals (like Becky Stark and Tom Brosseau) to the Largo stage on the 28th but my top choice would be Jonah Smith, who’ll be doing a set at the Hotel Café. The Silver Lake via Brooklyn troubadour makes funky, folky music with a Southern vibe. “Live One,” one of my favorites off his should-be-better-known CD, Little Known Cure, is a politically-barbed gem ala Todd Snider.

Foxygen is one of the best punny band names going. The group, which headlines the Echo on Friday, also creates some cool retro rock that doesn’t take itself too seriously as their latest CD title We Are the 21st Century Ambassadors of Peace and Magic suggests. Over at the Echoplex, the spirit of punk rock lives with a bill featuring the much buzzed-about Danish band, Iceage and Fat Possum’s Milk Music. The Canadian outfit Royal Canoe docks at the Bootleg 3/29 to deliver their eclectic edgy-meets-dancey indie rock along with Fol Chen. If you want to brave the hoops fans celebrating March Madness at LA Live, you can catch a free concert featuring Gold Fields and Capital Cities.

Friday will also find the Americans (the L.A.-based band, not the TV show) coming to McCabe’s for an evening of Americana (naturally) music. NYC pianist/singer/songwriter Jon Regen has a set at the Hotel Café on the 29th, while veteran blues troubadour Doug McLeod has a show at Yolies in Ventura on Friday and then comes to Culver City’s Boulevard Music Saturday night.

The Last Bison comes to the Mint on 3/30

The venerable Van Dyke Parks is playing a pair of shows at McCabe’s on Saturday (the early one is already sold out). Joining him will be Tom McDermott. Living Colour has reformed to perform their Vivid album at the El Rey on the 30th. I have to give Saturday night’s top honors to The Last Bison. The Virginia-bred band has just released a highly impressive debut, Inheritance. I am especially taken with the lead-off track, “Switzerland,” which makes me think of Generator-era Freelance Whales.