The post SxSW concert scenes begins with a HUGE Tuesday. Black Francis (aka Frank Black) has a sold out show at the Mint with ex-Muffs Kim Shattuck opening, while Ivan & Alyosha have sold out the Echo. I love their awesome All The Times We Had CD, which is packed with marvelous melodic rock that makes me think of George Harrison. Josh Ritter brings his Royal City Band to the Fonda with Lake Street Dive as openers. Ritter’s fine new album, The Beast in Its Tracks, holds a more spare sound so it will be interesting to see how he translates it live. And speaking of spare, Katie Crutchfield (ex-PS Elliot) creates very spare and very haunting songs with her new project. Waxahatchee, which is opening for Thurston Moore’s new outfit, Chelsea Light Moving, at the Echoplex on the 19th along with the intriguing female trio Grass Widow.

Lianne La Havas has exploded so much in the last year that she is headlining a two-night stand at the El Rey Tuesday and Wednesday. She delivers the goods with her hard-to-resist soulful sound. Wednesday is also the night that Wavves washes ashore at the Echo (along with Fidlar) and the band sticks around to play the Smell on the 21st – all in advance of their new Afraid of Heights CD. Another good East Side show can be found at the Satellite, where Madi Diaz tops (imho) a bill that also boasts Rachel Goodrich and Swedish songstress Faye.

Thursday offers a little bit of everything music-wise. Twangsters will want to hightail it to the Satellite, where Mark Lennon & the Southern Tier, Chris Pickering and Rod Melancon will fill the night with rootsy tunes. Rising Aussie rockers The Rubens will be showcasing songs from their upcoming Warners release at the Hotel Café. The always-intriguing Lisa Germano, who released her 9th album no elephants last month, performs at El Cid on the 21st. If you are want to hear some eclectic funkiness, then head to Hermosa Beach on Thursday as Brooklyn’s The Pimps of Joytime will be rockin’ Saint Rocke with their poly-genre rhythms.

A legend of the blues variety, Guitar Shorty (who started his career at 16 in Ray Charles’ band) performs at Harvelle’s and local funk icon Charles (“Express Yourself”) Wright brings his latest incarnation of the Watts 103rd Street Rhythm Band to the Mint on Saturday night. The House of Blues will be jamming to the music of Umphrey’s McGee on both Friday and Saturday nights. It’s a party time for these impressive improvisationalists who are toasting their 15th anniversary. Sunday night is “Nez” night at Agoura Hills’ Canyon Club as Michael Nesmith makes a rare local appearance. The question is if it will be a “Pleasant Valley Sunday,” since he is planning to play just his post-Monkees material on this tour. 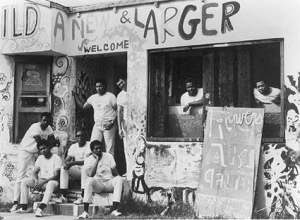 Besides these celebrated veterans, a number of impressive young acts are coming through Southern California this weekend too Sara Melson, whose April release A Million White Stars is populated with bright folk-pop, can be heard Friday night at Besant Lodge’s Beachwood Canyon Song Circle. Also Friday, former Girls frontman Christopher Owens makes his L.A. solo debut at the Wilshire Ebell. Although Fat Possum put out his debut disc Lysandre, Owens’ music is more in the melancholic chamber soft rock vein.

The Fonda Theatre unchains the hot hot UK rock group Django Django on Saturday the 23rd. Pebaluna, who released the slinky cool Carny Life last year, shares a bill with Jesca Hoop at the Hotel Café on Saturday. The rootsy band The Whispering Pines (can you figure the sliver-like connection between their name and Pebaluna’s CD title?) are at the Satellite with White Doves and Guides.

Rod Melancon makes his second appearance on a recommended bill this week. The L.A. via LA (that’s Louisiana, folks) troubadour will be at the R Bar Saturday night with Nocona, which is 3-parts Paladino plus one part Justin Smith of Old Californio. Also on the 23rd is Rich McCulley’s CD release show at the Cinema Bar. His latest, The Grand Design, is a grand disc of twangy ‘n’ pop. If you are in the Fullerton vicinity Sunday night, slide over to the Slidebar and catch Old Man Markley. Disregard the “old” in their name, these are some energetic Valley kids who dive into bluegrass like the Pogues tackled Celtic music. 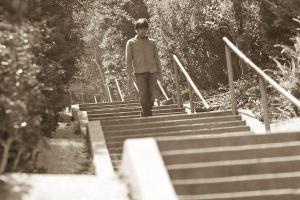