Archive Alive: The Return to the Original Nuggets

Posted on November 7, 2012 by Michael Berick

I don’t know how we got our copy of the Nuggets album back in the mid-70s. Sure, we were “cool” – as were most suburban kids in 1970’s Cleveland were. (insert your laughter here). Ok, we did read Cream magazine and later the Trouser Press, so we weren’t part of the Styx scene.

Anyway, somehow we had a copy of that album and I remember playing it nearly to death. Every song was awesome. There were the familiar Beatlesque feel to “Romeo & Juliet” and “Lies” and Dylan-like “A Public Execution” and the otherworldly quality to the Electric Prunes’ “I Had Too Much To Dream Last Night” and the Count Five “Psychotic Reaction.” The odd story of the one-armed drummer “Moulty” and the Standells’ murky “Dirty Water.” Being introduced to the world of Roky Erickson through “You’re Gonna Miss Me” as well as hearing early cuts from Todd Rundgren in the Nazz and Ted Nugent in the Amboy Dukes. 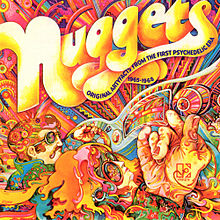 The cult success of this album of cult music spawns a series of Nuggets volumes and knockoff like Pebbles, along with entire record labels (Norton, for one). There was a big box set in 1998 and now Rhino has “original artyfacts.” The label will release a remastered 180-gram double-LP on Nov. 13 and a CD on Nov. 27. In the immortal words of the Shadows of Knight – “Oh Yeah!”