So this year’s contenders for the Rock and Roll Hall of Fame have been released and it’s a crop that covers the number of genres.

There are the classic rock groups: Rush, Deep Purple and Procol Harum

Female-fronted bands: The Marvellettes, Heart and Joan Jett & the Blackhearts (although both could fit into the classic rock category too)

Plus a singer/songwriter (Randy Newman), a New Orleans act (the Meters), and a German electronic act (Kraftwerk)

Putting my preferences aside and looking at the combination of success, career longevity and legacy/influence, I’d say that final choices will be made between Rush vs. Deep Purple, N.W.A. vs. Public Enemy, Chic vs. Donna Summers, and Heart vs. Joan Jett, with Randy Newman, Kraftwerk and Albert King also being strong contenders. 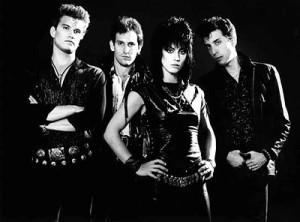 Joan Jett and the Blackhearts

Of course, I don’t get to vote and could be totally off the mark.

I am a longtime writer, and lover, of music and pop culture. I have written for Entertainment Weekly, the Los Angeles Times, the LA Weekly, the San Francisco Chronicle, Cleveland Scene and more places (that I wouldn't take up more of your time mentioning now).
View all posts by Michael Berick →
This entry was posted in Music, and tagged Albert King, Chic, Deep Purple, Donna Summers, Heart, Joan Jett & the Blackhearts Paul Butterfield Blues Band Procol Harum, Kraftwerk, Randy Newman, Rock and Roll Hall of Fame, Rush, The Marvellettes, the Meters. Bookmark the permalink.