The ‘Mats’ Movie And Other Cool Music Documentaries

The Replacements were, and probably always will be, one of those important bands in my musical pantheon. And I am not the only one. Earlier this week, I wrote about the just released Treatment Bound, a ukulele tribute to Replacements songs. And the documentary Color Me Obsessed is another testimony to the band’s impact, cult level as it may be. 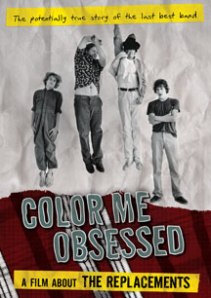 Directed by Gorman Bechard, the film has been a hit on the film festival circuit and now it is getting its DVD release as a 2-disc set, complete with 6 hours of bonus material.

Bechard took an interesting approach to this documentary. He didn’t include any Replacements’ music in it but instead filled the film with those “obsessed” with the band – from musicians like the Decemberists’ Colin Meloy, Tommy Ramone and the Hold Steady’s Craig Finn, to journalists (Robert Christgau, Ira Robbins, Greg Kot, to name a few) and fans (both well-known and the guys next door).

Color me curious about this film. The documentary comes out on Nov. 20 on MVD Entertainment Group.

There are other music documentaries about musicians that folks have long been curious about.

There are new entries in the Bob Dylan,  Rolling Stones and Beatles documentary filmographies.

Coming out next week is Bob Dylan and the Band: Down In The Flood. This documentary explores the long-fascinating time when “Dylan went electric” during his 1966 tour as well as his productive musical relationship with the musicians who became known as The Band, which resulted in the Basement Tapes. This MVD release includes interviews with Garth Hudson, Ronnie Hawkins, Sid Griffin, and other Dylan and Band experts.

The Rolling Stones: “Under Review 1975-1983: The Ronnie Wood Years Part 1,” as the title suggests, puts the spotlight on the Stones during its early Ronnie Wood era when the group put out such acclaimed albums as Black And Blue, Some Girls and Tattoo You. The DVD, also coming out on Nov. 20 by MVD, comes stocked with archival footage and new interviews.

Like Color Me Obsessed, Beatles Stories is a documentary where people share their tales and recollections about the Fab Four. Brian Wilson, Smokey Robinson, Ben Kingsley and Henry Winkler are among those who shares their favorite “Beatles Stories.” The documentary, directed by Seth Swirsky, has 30 minutes of additional footage for its DVD release, which Cinema Libre Studio (who release a number of fine music-based documentaries) puts out Oct. 2. That night, the movie will be screened by the American Cinematheque at Hollywood’s Egyptian Theatre.

My Father and The Man In Black is a documentary examining the relationship between Johnny Cash and his manager Saul Holiff. The film premieres in New York City at the Quad Cinema on Oct. 7 (no word yet on the DVD release). The film (again as the title suggests) is the work of Saul’s son Jonathan who utilized a storage locker stuffed with collected material (letters, audio diaries and taped telephone calls) from his father, from whom Jonathan was estranged from when Saul committed suicide in 2005. It adds up to something that could be an intriguing, and different, look at the music legend.