August is ending and September is beginning. Summer is concluding and Fall is on its way. These changes result in a week filled with the old and the new.

First, the blasts from the past.

Beloved L.A. glam poppers Redd Kross are back with a rockin’ new disc (their first since ’97) Researching The Blues. They have a free show at Amoeba on the 28th and will be playing the FYF festival over the weekend (FYF also has indie rock dinosaurs Dinosaur Jr. on its bill).  Eighties nostalgia will run thick Tuesday at the Bootleg. There’s an early show from Kristin Hersh, of the influential ‘80s group Throwing Muses, while the late show features Spain (in a record release gig) and Mike Watt & The Missingmen.

Wednesday night offers another reunited L.A. rock legend, Concrete Blonde, performing at the Troubadour. Johnette Napolitano and original guitarist Jim Mankey (and new drummer Gabriel Ramirez) have a new album to share along with old gems. They also play Solana Beach’s Belly Up on the 28th.

The Belly Up will also host original alt.country heroes the Old 97’s on the 29th. They then swing through Santa Ana on the 30th to play at the Observatory before two nights at the El Rey (Aug. 31-Sept. 1). Not only is this quartet still intact after 20 years, but they are still making excellent music as their recent efforts, the doubly terrific The Grand Theatre Volume One and The Grand Theatre Vol. 2, demonstrate. They are also celebrating the 15th anniversary of their album Too Far To Care, which Omnivore Recordings is reissuing in a special editor.

Surf guitar icon Dick Dale has a gig at the Malibu Inn (a fitting locale) on Friday the 31st. Veteran bluesman Eric Bibb joins acoustic forces with bluegrass fiddler/banjoist Dirk Powell, Cajun accordionist/fiddler Cedric Watson and harmonica master Grant Dermody for an evening of roots music at the Skirball on the 30th. More fine bluegrass can be heard at the Pantages on Sept. 1, when Steve Martin returns to town with the talented Steep Canyon Rangers. I saw him play at Largo in the Spring and not only did he do a lot of nifty banjo picking but he didn’t forget to slip in some comedy either.

But the concert that brings the biggest rush of nostalgia is the Adventures of Pete and Pete Reunion spectacular happening at the historic Orpheum Theatre on Tuesday the 28th. The folks at Cinefamily and FYF will have the crowd yelling “Hey, Sandy,” as they have teamed up to assemble this one-of-a-kind trip down memory lane to Wellsville, featuring (with what they say) most of the cast and creators for this ‘90s Nickelodeon show that was a cult classic. The program was notable for its offbeat humor and cool guest spots by musicians like Michael Stipe, Marshall Crenshaw, Syd Straw, David Johansen and Deborah Harry. Don’t know if any of them will drop in but the show’s “house band” Polaris (featuring Miracle Legion’s Mark Mulcahy) is scheduled to play.

However, not every show this week arrives courtesy of the way-back machine.

Monday offers the fine pop craftsman Bleu at the Hotel Café where Air Traffic Controller will be making their LA debut. Over at the Echoplex, the Very Best (an intriguing collaboration between UK producer Johan Hugo and Malawian singer Esau Mwamwaya) will play songs from their disc MTMTMK with the electro duo MNDR (yes, it’s a lot of letters between them) also on the bill. Meanwhile there are two chances to catch the Peach Kings this week. Monday at the Bootleg and Tuesday at Harvard & Stone. This duo delivers a bumper crop of raw and potent roots rock. 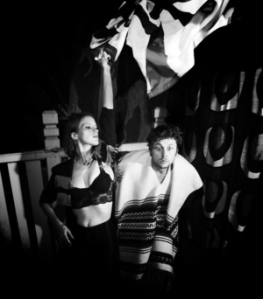 On Tuesday night, the Hollywood Forever cemetery will be alive with the sounds of the indie super group Divine Fits (with Dan Boeckner of Wolf Parade and Handsome Furs. Britt Daniel of Spoon. Sam Brown from New Bomb Turks).

Wednesday, the Hotel Café hosts a pair of terrific acts. Lovers of harmony-rich country music will want to check out the lovely Trishas (a quartet of fine female singers from Austin – none of whom are named Trisha) showcase tunes from their impressive debut High, Wide & Handsome. Things will get a little more raucous later that night when the rootsy rockin’ Philly outfit Hoots & Hellmouth perform.

Twang fans will be happy at the Cinema Bar where David Serby and Grant Langston will be playing.