Memorial Weekend signaled the official start of summer, so it seems appropriate that this week finds the Beach Boys playing in town at the Hollywood Bowl (6/2) and Irvine Meadows (6/3). Tickets probably now are just available at brokers since this tour celebrates the band’s 50th anniversary and reunites Brian Wilson with his old bandmates. It’s sure to be a historic show but less certain how good they will sound.

The other big reunion of sorts is the Clean’s appearance at the Echo on May 30. This influential New Zealand band doesn’t come to town often so it is a real treat. Opening for the band are their Merge labelmates Times New Vikings.

Then there is the Jack White show at the Wiltern May 30 & 31. There is little more to say about the multi-talented White and his multiple projects, but get there early to see the openers Pokey LaFarge and the South City Three. These guys will be rippin’ it up with their old school roots tunes.

McCabe’s has put together another weekend of terrific shows. Friday night, features Joe Pernice – first generation No Depression fans remember him from the Scud Mountain Boys. McCabe’s favorite Peter Case is there June 2 with a screening of the music documentary Troubadour Blues and Texas legend Jon Dee Graham wraps up the weekend of shows on Sunday as he showcases tunes from his new one, Garage Sale.

Singer-songwriter fans should also note that Nashvilleans Eric Brace and Peter Cooper swing through the Southland, starting Tuesday at the Coffee Gallery Backstage and Wednesday at South Pasadena’s Wine & Song at the Firefly, while going to Ventura’s Zoey’s Café on the 31st. The 31st also is when Mariah McManus commences her month-long residency at the Hotel Café.  That night too you can find Greg Laswell, who released a new album, Landline last month, playing at the El Rey on the 31st. On June 2, the El Rey will be the place to hear Cass McCombs’ intriguing lo-fi music.

Try to catch the London band Dry The River at the Bootleg on the 5/30. Their rootsy music is a pure joy. I have also been enjoying the young band, Horse Feathers, whose folksy sound is a little more laidback but quite compelling. They’ll be at the Echo on the 31st. The Echo plays hosts to the Canadian band, Wintersleep on the 29th. This hooky outfit has an album due in mid-June that Dave Fridmann (famous for this Flaming Lips work) had a hand in. 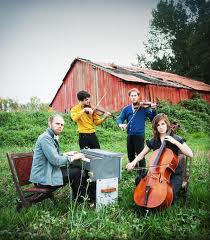 If you aren’t heading to the Pernice show on June 1st, your other choices include veteran “California Soul” group Mother Hips at the Bootleg, LA rockers Skyline Pigeons doing a record release show at Molly Malones and Hospitality at the Satellite.